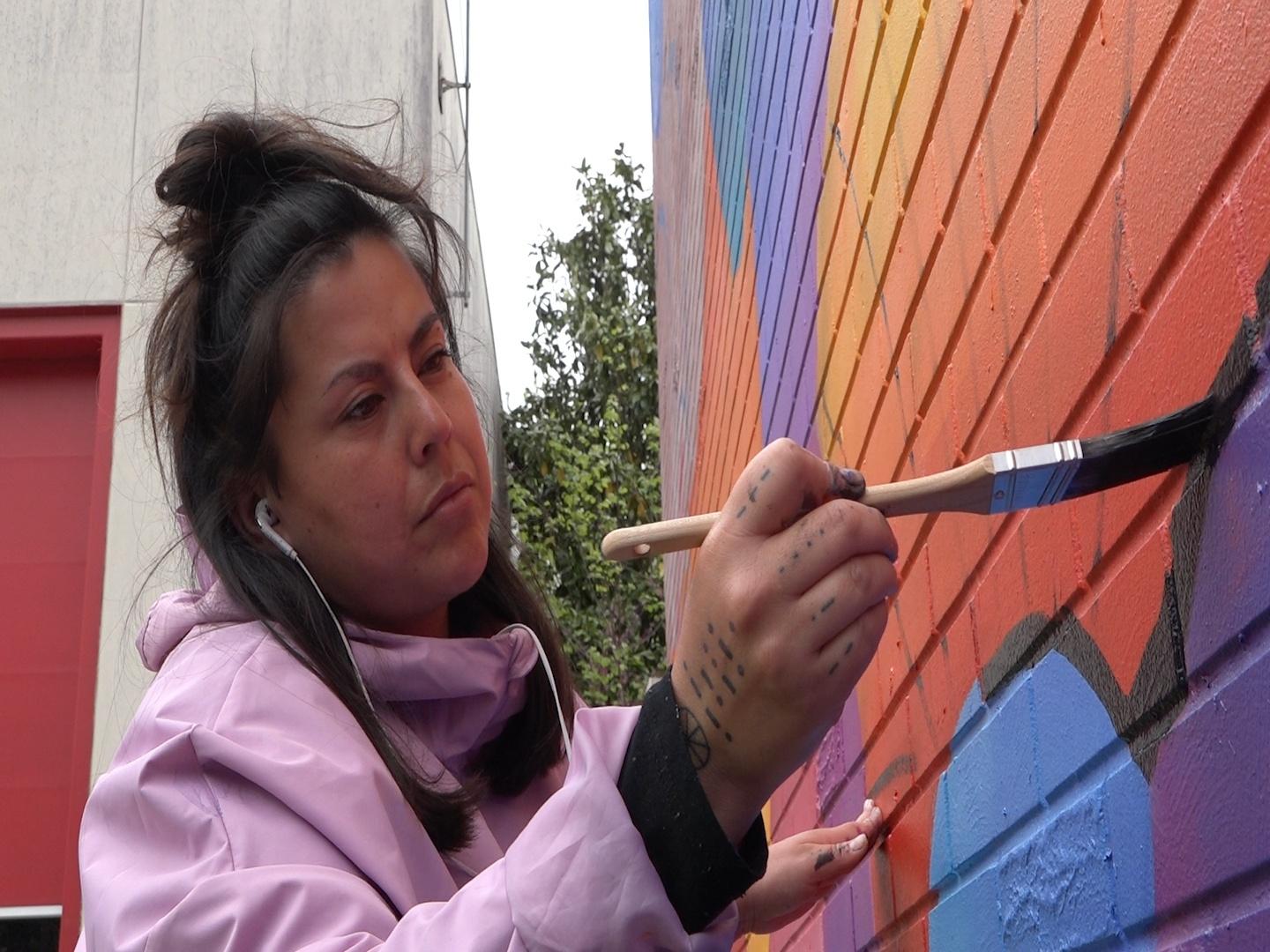 'Calma' is in the works outside The Lodge in Bethlehem.
Credit
Northampton
BETHLEHEM, PA - It’s the best way artist Pau Quintanajornet says to grab the attention of passersby and inspire them to open up about an issue hidden in plain sight. “We don't have to feel shame or anything,” says Quintanajorney, “I think it is such an important issue and for everyone who suffers with it or has this situation, it’s really important to have a society that speaks up and supports.”

In a project part of the SouthSide Arts and Music Festival, the Chilean born artist is collaborating with ArtsQuest on an interactive art experience and mural designed to raise awareness of the challenges people face when dealing with mental health issues. Senior Director of Visual Arts at ArtsQuest, Stacie Brennan, says, “I think this mural does a great job of raising awareness on multiple levels; both around the issue of mental health and community awareness that people can drive by and see this (it will brighten their day) but also help them realize it’s something that we are all dealing with in our community. And it will also raise awareness for what public art can do for a community; for people to feel ownership and engagement in the area that they live in.”

‘Calma’ is a 43 foot wide by 35 foot tall painting that is being created on the west wall of Cafe The Lodge. But this isn't just another wall on another street. The site of Quintanajornet’s latest project is popping up alongside a place to eat well and do good. Cafe The Lodge explicitly employs and empowers those with mental health diagnoses. Diamond Major of The Cafe says the mural already has made an impression on her; “I feel like at home, you know? I feel appreciated because it is one of the few murals that represents women in our area. Just getting to see the vibrance of it, it kind of reminds me of why we are here anyway, in the first place. We are trying to enrich people’s lives and it’s similar to the way the mural visually enriches us and makes us feel automatically happier. At the Lodge, that’s our goal with our clients; we ultimately want to improve their lives and make them feel better about their future.”

The Cafe employs up to 18 people at any given time, while the Lodge houses a dozen individuals in the community. It’s all to inspire independent living and employment for those with mental health challenges. Kevin McCabe of The Lodge says the mural will become an extension of their larger goal; raise awareness of a topic that’s often difficult to discuss and bring peace to those battling mental health issues of their own; “It calms the mind, it really does. And when you take something that’s raw, whether it’s a blank sheet of paper or a piece of wood that you are going to form into something else, and you watch it create, there’s something calming about that. There’s something beautiful in watching it form. In that moment it allows you to forget about your worries, forget about everything that’s going on in your life and focus your energy into creating a beautiful piece of art. “

The mural, located at 427 East fourth street, is a continuation of Quintanajornet’s “artivist” collection called “Project Wallflowers.” The 36 year old artist has been working on this project since 2013 and each piece is inspired by the idea of empowerment.

Quintanajornet explains, “The wallflower itself is one of the strongest flowers because it exists in areas where they don’t have the best conditions or the brightest colors. It’s a flower that with time and with growing can break walls. And I have that as an image for me to break down walls; mental walls like ideas. For me, I wanted to have a project which helps me to be able to travel around the world, meet with very interesting people and communities and use my work to pay tribute but also to show awareness about things.”

Each piece within the collection is created in public, urban spaces and designed to become a bridge for dialog. The artist says by creating art in public spaces, wallflowers can witness different ways of communication; unveiling the fascinating stories, dreams, hopes and desires of the people who live and work around it. Pau has many hopes for her first Bethlehem piece; “to start a conversation of course and to interact with the community,” she says, “I think this is just one of many murals I’ve seen since I am here so I think it is part of an ongoing very beautiful project so with each mural and each artist that comes to the city, we’ll grow and evolve so I am part of this big progress.”

The mural will be worked on every day until it’s complete on May 4th. By then, Quintanajornet hopes to have brought some colorful mindfulness to Bethlehem and its community. It’s a vibrance that will continue to radiate for as long as the wall it’s on stands.