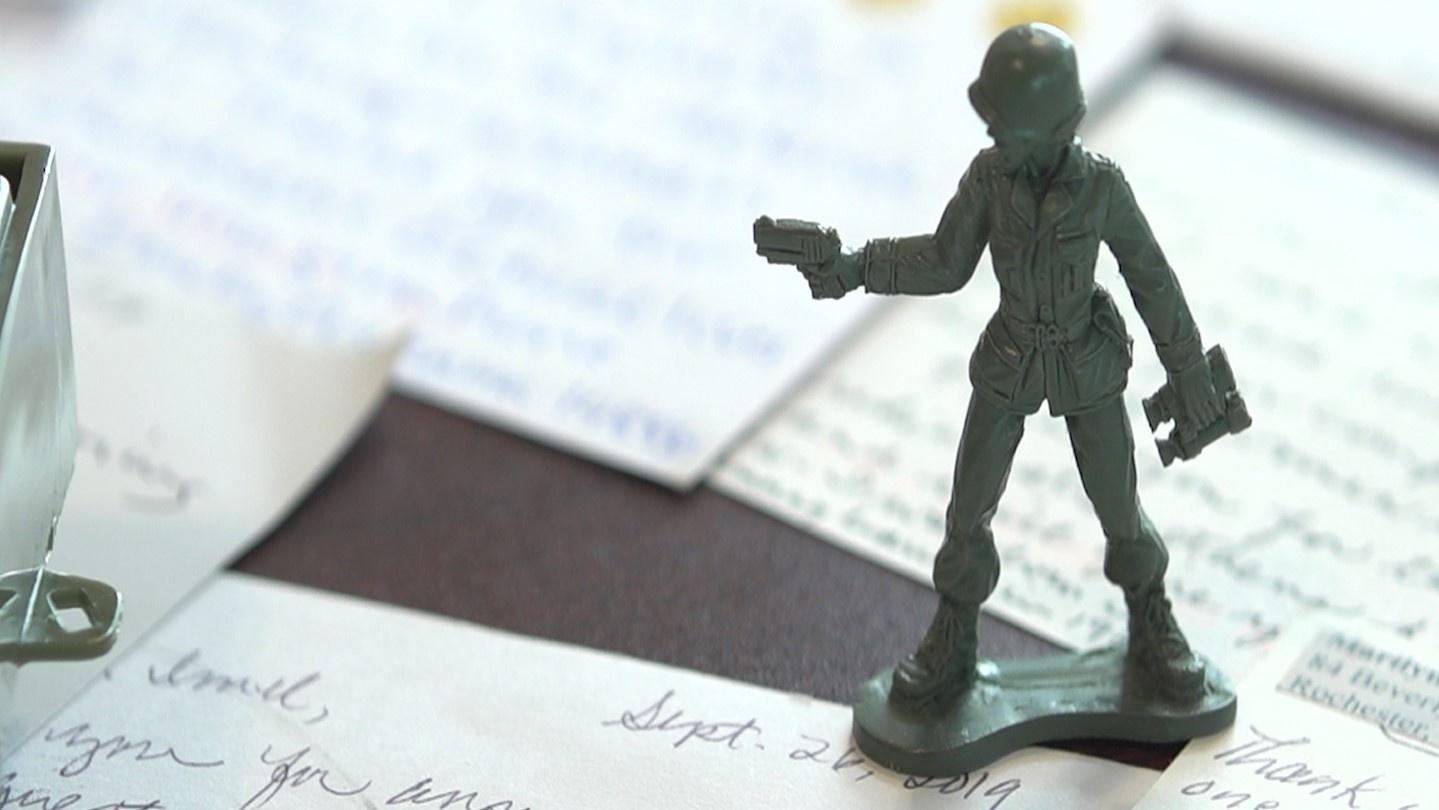 SCRANTON, PA - Brianna Wildman knows how important it is to secure solid backup.

"I joined right out of high school, five days after my 18th birthday I shipped out for basic and I got out in '01, she says, "I served a year in South Korea and I also served in Fort Drum, New York."

Nowadays, the Pennsylvania veteran, who served as a diesel mechanic for the US Army, is working on a new mission; helping bring a young girl’s dream to life.

"I think it’s about time and I’m glad I get to be apart of it and I think it’s going to put a little bit more exposure for young girls and even boys who want to play. I want little boys to also be aware that females are taking over in a lot of historically male dominated positions. There are a lot more girls in combat positions now," Wildman tells PBS39 News Tonight Reporter, K.C. Lopez, "I wanted to be a soldier since I was like ten years old so there are little girls who actually want to be soldiers and it’s going to be neat and I’m excited we’re making them here, you know?"

Wildman is a quality control officer at BMC Toys; one of the nation’s largest makers of tiny green Army men… and now, the only makers of army-women. The Scranton based company recently began producing female figurines this fall with the help of Northeastern Plastics Inc.

"It is really exciting to be a part of this," explains Northeastern Plastics Inc. President, Cindi Telesca Heyen, "We’ve been manufacturing custom-injection moldable products since 1982. So they basically, somebody comes and says I have either a product I want to make or I have a mold, I want to make a product, and we get to work together and make the products. So, Jeff actually had all the molds, except for the female, and so began making some of the products for him."

It’s a concept over 80 years in the making. When tiny troopers first become plastic toys, the U.S. was embattled in WWII; where more than 60 thousand Army nurses served and over a thousand women flew aircrafts for the Women’s Airforce Service Pilots. Today, women make up 20% of the Air Force, 19% of the Navy, 15% of the Army and 9% of the Marine Corps.

Since the 1930s, tiny plastic soldiers have been a staple in American homes and have been found lurking inside of children’s toy chests. But women have been left out of it. That is until a little girl from Little Rock, took pen to paper...

“My name is Vivian...I am six years old," she wrote, "Why do you not make girl army men? I saw the pink one’s but thows are’t girls and pepel in the army done’t were pink. Some girls done’t like pink so please can you make army girls that look like women. I would play with them evry day and my friends would to! Thank you, Vivian Lord”

That six year old’s letter was sent to multiple toy companies but only one replied...

"Well, the thing was I was prepared for it because it’s not the first time it’s been asked of me. I’ve been offering plastic army men as an Internet retailer since early 2000s and every now and then somebody would ask me, do you have any army women toy soldiers? And I would always have to say, I’m sorry, I don’t," Imel explains, "I even tried to see if anybody made them because if customers are asking for something, well, it’s probably a good idea to see if you can give it to them, you know? So I did research and nobody made anything."

Jeff Imel, President of BMC Toys at VictoryBuy Inc says Vivian’s note confirmed what he’d been thinking for some time; there was a demand for female figurines. But what was initially going to be just four women working beside their male comrades ...became six...then twelve, later fourteen, and now includes fifteen different female fighters thanks to twelve hundred backers on Kickstarter who pledged over 55 thousand dollars in a month’s time.

"So we have the pathfinder captain and this is the first prototype we had made. So we started off with her and then we did the standing firing rifle which is a rifleman. Then we did a kneeling rifleman and we did a prone rifleman. We have the bazooka operator, which is real important. Then we had a low crawling soldier. With the running one, I cheated a little bit. I gave her a ponytail, a braid, that had fallen down, that was a bun and i did that because I wanted little girls to see that long hair and identify with and I read stories about women soldiers whose bun came undone and one soldier, she thought it was a snake because she was in a training program and thought it was a snake and freaked out for a moment.

We’re going to have a military working dog and dog handler in this set."

Lopez asked, "Is that a female or male dog?"

To which Imel responded, "I thought about that and I thought well, she should probably be a female dog."

"Okay, it kind of does" says Imel, "I am saying 15 different soldiers and a stretcher accessory and a military working dog. That’s the way I’ve been phrasing it. But yeah you’re right, it’s a big set now."

What the company is doing has resonated with servicemen and women across the country. Today, Vivian’s letter has company…

"Dear Mr. Imel, thank you for your leadership and humanity in finally working towards creating women toy soldiers after Vivian’s letter. Showing gender diversity in toy production and feeding children’s imaginations with toys that reflect their lives and bodies is incredibly important."

"My name is Kelly. I am a female veteran from Oklahoma and I am so excited about the new toy. I almost cried when I saw the report. Thank you so very much."

"Dear Mr. Imel, thank you for honoring the request of a six year old girl and creating women toy soldiers to feed children’s imaginations. The idea that women can be heroes and defenders of our country is extremely important. Our daughters thank you as well. Sincerely, Anna."

"They’re just a little piece of plastic," Imel says, "For military women especially, it makes them feel a little bit of recognition. They felt a little bit invisible."

Got a news tip? Email K.C. at KCLopez@wlvt.org!